Gordon Ramsay, an acclaimed chef and TV show host, stands in front of his employee Christina Wilson’s row home, which he helped renovate as a gift. Photos by Kyle Born Photography

After winning Season 10 of Hell’s Kitchen, Wilson worked her way up to become group executive chef of several of Ramsay’s restaurants, including overseeing the early January opening of Hell’s Kitchen at Caesar’s Palace in Las Vegas. As a way of saying thank you, Ramsay recently gave Wilson the gift of a renovation to the ground floor of her 1920s Philadelphia row house, which she bought using prize money from her Hell’s Kitchen win.

The delighted Wilson handed over the keys to Ramsay and went away for four weeks — she splits her time between Philadelphia and Vegas, where she works. Ramsay found designer Matthew Ferrarini on Houzz and collaborated with him on the design and products to furnish Wilson’s home. Ramsay and Ferrarini also got input from Wilson’s brother, Jon, and his wife Jenny, on her style preferences.

When Wilson returned to Philly, she got to see the completed project, which includes a stunning transformation of the kitchen. Because what else would you expect from one of the world’s top chefs?

How to Create and Use a Houzz Ideabook

Ferrarini & Co. Kitchens & Interiors
Before: For a story about a renovation of a chef’s home, it makes sense to start with the kitchen. Wilson thought it had good cabinet space but wasn’t set up for how she likes to cook at home. For example, her KitchenAid stand mixer wouldn’t fit anywhere in the existing space, so she kept it in the basement, lugging it up when she needed it.

The small window and offset door to the right limited the reach of natural light into the rest of the home.

Ferrarini & Co. Kitchens & Interiors
After: Ferrarini reconfigured the kitchen so Wilson would be able to see straight through the home to the backyard as soon as she walks in the front door. Putting two glass-paneled doors in the center of the back wall led him to a galley-style layout. From there, he knew he wanted to tuck the taller elements like the refrigerator and pantry cabinets on the left. That meant the right wall could be a bit airier with the range and sink.

“Never in a million years would I have thought to flip the kitchen how he did, and this is what I do for a living,” Wilson says. “It’s really remarkable.”

Ferrarini & Co. Kitchens & Interiors
A pullout work surface gives Wilson extra prep space. The engineered quartz countertop wraps around the wall to become storage and cocktail bar space for the dining room (shown later in this story). Wilson clears off that extra countertop area and dusts it with flour on nights when she’s rolling out dough to make fresh ravioli.

Exposed ceiling beams — the one in the foreground is original to the home — and caged bulb lights fit with the industrial-transitional style Ferrarini was going for.

Ferrarini & Co. Kitchens & Interiors
By chatting with Wilson’s brother and sister-in-law, Ferrarini got a sense of her style. He chose a custom navy blue (based from Naval by Sherwin-Williams) for the cabinets and paired them with brass fixtures for a color combination that worked well with the industrial theme. Wilson now keeps her stand mixer on one of the open shelves (not shown). Not surprisingly, the new kitchen is now her favorite area of the home.

Watch: See Wilson’s reaction to her home’s transformation
Before Photo

Ferrarini & Co. Kitchens & Interiors
Before: Here’s a look at the home from near the front door. Two half walls with circular cutouts — one of which is seen here to the right — broke up the living room and dining room in a way that Wilson thought was obtrusive. The wall in front of the kitchen at the rear prevented light from spreading through the row house.

Ferrarini & Co. Kitchens & Interiors
After: With the half walls and kitchen wall removed, the house opened up. A fresh coat of white paint, including over a brick wall that was exposed during the demolition of the previous space, enhances the home’s natural light. Ferrarini chose to paint the brick because it wasn’t in great shape and he thought having such a large amount of exposed red brick would overwhelm the tight space and constrain the color palette used in the furnishings. “White toned it down, so visually it’s just a little treat on the eyes versus being the main attraction,” he says. An herb garden and new copper pipes pop against the crisp, textured brick wall.

Ferrarini & Co. Kitchens & Interiors
Before: Looking toward the front of the house before the remodel, you can see how the half walls, cutouts and a small L-shaped stair landing with steps made the space feel closed in. A closet-size vestibule took up more room than was practical. Ferrarini also noticed that the chair and sofa were just too bulky for the narrow home.

What’s more, the front room often became chilly near the windows, causing Wilson to migrate deeper into the home during winter. “It was so dark and cold, which was unfortunate because it’s such a charming house,” she says.

Ferrarini & Co. Kitchens & Interiors
After: Without the vestibule and walls, the living room is able to breathe a bit more. Streamlined furniture, including a sofa in a fun teal color, better fit the space and Wilson’s personality.

Ferrarini & Co. Kitchens & Interiors
Removing that bulky landing at the bottom of the stairs added a small but valuable amount of square footage.

“Gordon is amazing, and I’m so lucky to work for him,” says Wilson, pictured here with Ramsay after seeing her renovated home for the first time. “I’m overwhelmed. I’ve never had such a generous gift given to me.”

Get the look: Shop for products from this renovation

Your turn: See how to create and use Houzz ideabooks for your own home project
Comment171
Shop Related Categories

Third-Generation Family-Owned Masonry Supplier in Virginia
For over 50 years, we have provided quality masonry products to homeowners, contractors, and architects at our... Read More

My Houzz: Olivia Munn Thanks Mom With the Kitchen of Her Dreams Full Story

Go Inside, and Outside, a Designer’s Stylish New York Brownstone Full Story 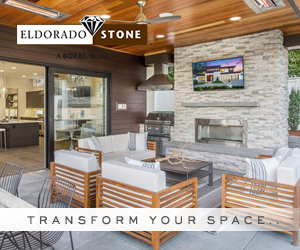 Houzz TV My Houzz: Olivia Munn Thanks Mom With the Kitchen of Her Dreams
By Mitchell Parker
The actor hires a design professional to help update the kitchen, living and dining areas
Full Story 88

Houzz TV My Houzz: NFL Star Deshaun Watson Surprises Mom With a Remodel
By Mitchell Parker
The quarterback thanks his mother with new furniture, cabinets and a fresh style that brightens his childhood home
Full Story 138

Before and Afters My Houzz: Ludacris Gives His Mom a Home Makeover
By Mitchell Parker
The Atlanta rapper and actor uses Houzz to find a pro and shop for items to help personalize the home he gave to his mom
Full Story 283

Houzz TV My Houzz: Kate Upton Gives Her Sister a Surprise Renovation
By Mitchell Parker
See the smiles after the model coordinates a fresh update to her sister’s Florida home
Full Story 33

Houzz TV My Houzz: Neil Patrick Harris Gives His Brother a New Backyard
By Mitchell Parker
The actor works with designers to create an inviting deck and pollinator garden, as well as a renovated family room
Full Story 88